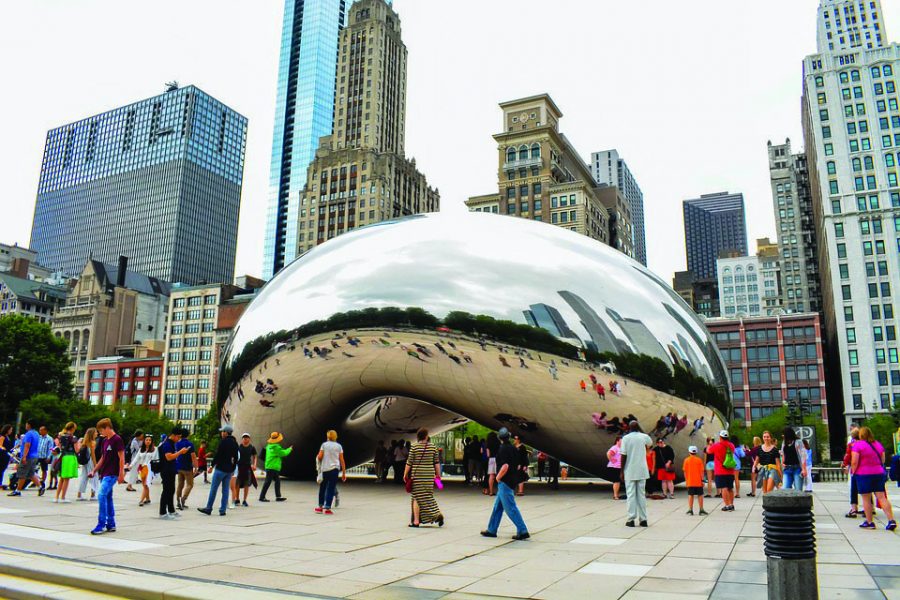 Over the past couple of years, the members of the Chamber Orchestra have spread their music throughout the state of Texas. However, last December, they got the opportunity to bring their talents to Chicago for the 2018 Midwest International Band and Orchestra Clinic and Conference, the largest music conference of its kind.

“We sent out a recording last year of some pieces we prepared, and we were invited by the Midwest Conference alongside several other Texas orchestras and bands,” senior viola player Jessica Qiu said.

The experience was a first for many of the orchestra’s players and allowed them the chance to perform at a different level than what they are used to.

“As a high school orchestra, I never thought I would get an opportunity like this to perform,” senior violinist Jennifer Xia said. “I had seen Plano Senior High School go to Chicago just last year, to be able to have that same opportunity to travel with my orchestra to an entirely new city to play music was incredible.”

This sentiment was shared even by players who are new to Chamber Orchestra, such as junior Michael Lam.

“It was honestly mind-blowing,” Lam said. “I have never traveled that far away from home, and getting to do that with friends was even more amazing. I was incredibly lucky, as well, to be performing alongside such talented musicians and to have the opportunity to play at such a prestigious convention.”

The new environment did present some new challenges for many of the players though.

“I think the change in environment definitely brought a weighted pressure,” Xia said. “We were in a new city performing in front of people that loved music, and we wanted to do it justice.”

This slight intimidation did help in certain aspects of the orchestra’s overall performance though.

“I think with all of the adrenaline in us, our senses were heightened to the point that we were much more sensitive about certain aspects of each piece,” Qiu said. “It really enhanced our experience of the music and the audience’s experience as well.”

However, the musicians’ sheer love of their craft overshadowed any sort of domineering pressure when they got up to play their first notes.

“Once we took that first breath together, we worked our magic as usual,” Xia said. “I have always loved performing in a group because there is something about looking across the room and moving with the rest of the orchestra that is so amazing.”

With that comradery between the players, the orchestra as a whole was able to give what they felt was one of their best performances.

“Our final performance was quite possibly our best yet,” Qiu said. “After we finished my favorite piece, the entire room stood up for a standing ovation, and I could see a few teachers tearing up. It was honestly surreal.”

This excitement was most certainly present in many other players both during and after the performance itself.

“My cheeks hurt from smiling during the performance, and Principal Williams, even came to me afterwards to tell me how my smile changed the performance for her, which was one of my favorite compliments ever,” Xia said.

However, the players were not the only ones involved in the success of the final performance, as orchestra directors Ryan Ross and Amy Gross have a significant hand to play in preparing the students for every concert.

“They really pushed us to our limits of what we could do and who we could impact in just a half an hour,” Qiu said.

The orchestra directors’ coaching not only helped with improving the players’ technique but improved their overall musicality as well.

“We had been playing this music for a while now and Mr. Ross had warned us that it would be tough having to constantly go back to music we had already performed,” Xia said. “The week leading up to the performance, he saw a lack of heart in our playing, and it really put everything into perspective. This was more than a performance for him: it was about doing our best, having fun and putting our genuine heart onto that stage.”

That love of music from both the students and the directors ultimately led to a satisfying end result at the Midwest Conference.

“The day we performed, we put our hearts out openly, and I hope it really showed,” Xia said. “The fact that Mr. Ross cried from the performance along with the audience members I think really says something about how meaningful music can be.”

This care for music extends beyond the Chicago performance and into the classroom for the members of Chamber Orchestra.

“Orchestra is definitely one of my favorite classes because of the family that I have become a part of,” Xia said. “Although I would have stayed in orchestra anyway, it is the people that really make all the difference.”

The value of being a part of orchestra in general is certainly not lost on most, if not all, of its members.

Even newer juniors recognize the positive impact of being in orchestra.

“Being part of orchestra here at West, surrounded by musicians who play at such a high level, has challenged me to work harder and to reach for higher standards,” Lam said.

“Through orchestra, I have found a new kind of music that I love to perform, I have been given opportunities for leadership as a co-president, and I honestly found my family here,” Qiu said. “Honestly, it has been the best thing that has ever happened to me.”

The school’s orchestra players very much love what they do, and they want to let any incoming junior know exactly what to expect as well as how great of an experience they will have being a musician for the Wolfpack.

“You get from the program what you put into it, so if you practice and rehearse at 100 percent, you are going to have a fantastic experience,” Qiu said.

This advice is expressed by other members of the orchestra as well.

“To incoming juniors about being a part of the West orchestra, the advice I would give is be prepared to be challenged in a good way,” Xia said. “Mr. Ross and Mrs. Gross know the potential of their students and only want the best, and they will push you to get there, even if you did not think you were capable. Definitely practice but do not lose sight of what the music is all about.”

The orchestra is not solely about music though. There are many fun activities that help people in different orchestras get to know each other better.

“Going to the orchestra events and activities is a surefire way to make new friends and enjoy new experiences together,” Qiu said.

Being an active member of the orchestra for many years has given both juniors and seniors the opportunity to interact with and become friends with people they might otherwise not have known.

“Outside of the music, we really do care about each other as friends,” Xia said. “I would be such a different person if I had not joined or if I had quit during my junior year.”

It is the love of music that brings these players together though, and they each rely on each other to make each and every performance their best one yet.

“Everyone has a distinct part in our orchestra, and I love the fact that we all rely on each other to be successful as a group,” Xia said. “My favorite thing about being a part of Chamber specifically is that I am surrounded by such talented people who motivate me to work harder and strive to be my best. We have such an amazing music program and I am glad to be a part of it.”