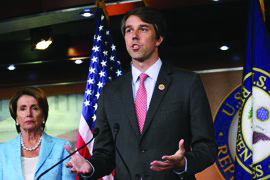 You Beto Believe It: Three Reasons to Vote for Beto O’Rourke on Election Day

Robert “Beto” O’Rourke has been exceeding everyone’s expectations rounding up many supporters and ralliers behind him. The Democratic nominee challenges the current Senator Ted Cruz for U.S. Senate. Here is why you should choose Beto over Ted.

1. Beto supports the need for background checks and gun control.

As citizens, it is our duty and need to protect our country and one another. The #neveragain movement made its impact across the nation and Beto intends to keep it in line. With background checks and certifying those who have a license for the use of guns, we can regulate and make sure that school, club, neighborhood, and any other shootings never happen again. The purpose of the Second Amendment, which essentially was meant for the 13 colonies to stop Georgia and South Carolina from having local militias overthrow the government, this was created in the 18th century. Using such arguments that Democrats are “taking away second amendment rights” is solely for the purpose to justify buying weapons that were not made or even heard of in the time period the Constitution was written. He is not taking away the Second Amendment, but only trying to make more strict regulations. Beto believes that we need to stop selling weapons designed specifically to kill. These types of weaponry are only needed for the army, not in our concerts, schools, streets or churches.

Ted, on the other hand, believes that everyone has a right of personal liberty to buy a weapon without going through elaborate background checks because it is their “right.” According to WNYC, he blames foreign born people for shootings, when the vast majority of the shootings that occurred were due to white males who had mental disorders and serious problems.

This a right and a privilege that we are abusing.

It is getting harder and harder to be a woman in this day and age, with the issues of abortion, rape, harassment, assaults, inequality- you name it. Planned Parenthoods are being shut down completely in some states, causing women and families to travel over 500 miles with gas money they cannot afford, according to National Public Radio. Many believe that Planned Parenthood should be shut down because they provide abortions to women, when in reality that is a very small percentage in the things they provide. For instance, there is access to immediate contraception, check-ups and family planning. Beto strongly supports Planned Parenthood that guarantee a woman’s access to birth control and emergency contraception, along with protecting low-income families who can barely afford access to health services. Planned Parenthood provides so much for families and for women, including cervical and breast cancer screenings. A woman’s right to access this amenity should not be compromised by men in power who believe that “every life matters,” because in reality, many women who cannot afford this type of health insurance die before, after and during childbirth.

If this does not make you want to change your mind about him, then say goodbye to healthcare for women.

In today’s world, it is becoming increasingly more difficult to be yourself. In 2016, the Supreme Court ruled that same-sex marriage was legal. However, the state of Texas overruled that decision, among many other states, which is unbelievable when all men, and women, are supposed to be equal under the law. Beto supports the Equality Act, which provides nondiscrimination to those in the LGBTQIA community. This means that everyone under the law is protected and will be treated equally. He also guarantees that same-sex couples are entitled to access the same federal benefits as any other Texas family, which should not even be an issue. Everyone deserves to be married to whomever they please and should not be persecuted for biological differences they cannot control. Beto seeks to repeal the Defense of Marriage Act (DOMA) entirely to ensure that every same-sex couple has the right to access social security and other benefits regardless of the state they live in. He also wants to provide equal pay to all American families, to end wage discrimination and close the gender pay gap. There is no need for people to think they are better than those who have different skin color or biological differences. We should all be equal under the law and that is what Beto is striving for.

Cruz and other Republicans made it legal for businesses, nonprofits and individuals to discriminate against same-sex couples, single parents and unmarried couples. He supports the ban for same-sex marriage, which is being continuously fought for in many states for couples seeking marriage and being declined.

Vote for Beto. No longer should people be discriminated against for uncontrollable things and their gender.

I urge each and every one of you to do your research, find out who your senator is and should be. Take the time to go vote for Beto and change the world, one step at a time.

Everything You Need to Know About the Impeachment Inquiry

The past few months have been a political hailstorm, beginning with a whistleblower complaint against incumbent President Trump and quickly escalating...

The internet is buzzing with the news that Spider-Man is swinging away from the Marvel Cinematic Universe (MCU). Avengers Endgame painted the picture ...

Stories of morning routines that begin not with the sound of an alarm, but with the artificial light of a phone screen and scrolling through notificat...

OPINION: The Relevancy of Standardized Testing is Declining

Through high school, students stress and worry over numbers and grades that will mean next to nothing in the years to come. With Advanced Placement ex... 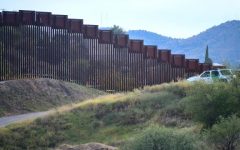