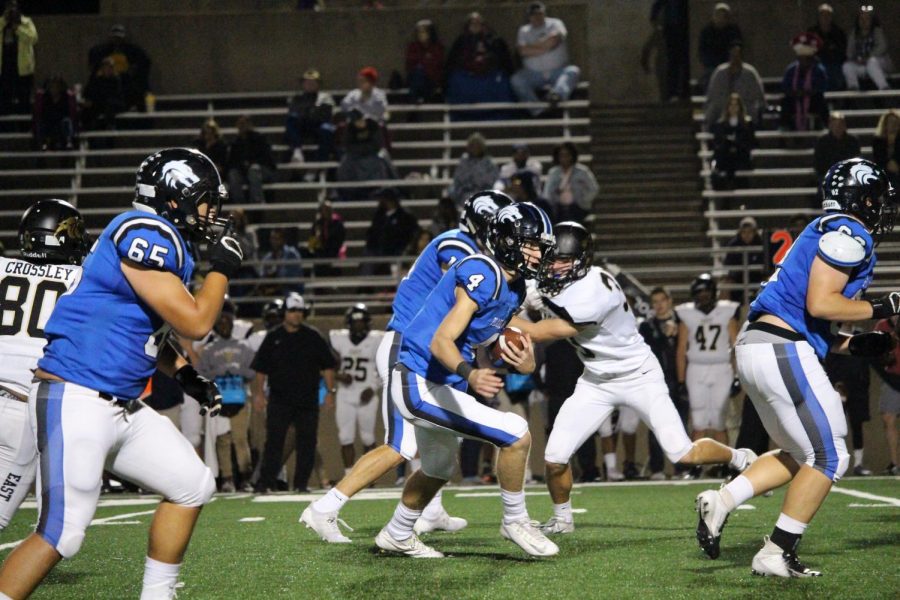 Plano West QB Will Cannon (#4) looks to pick up a few yards on a rush. Cannon threw for 117 yards against Plano East.

Plano West was dealt another loss last Friday night against Plano East, losing their homecoming game by a score of 51-17.

Plano East opened the scoring by striking on their first drive of the game with a Joseph Carter 3-yard run. Plano West would answer back with a 24-yard field goal from senior Jack Swearingen to make the score 7-3. With 3:28 remaining in the first quarter, Panthers’ QB Brandon Mallory scored on a 2-yard rush. Plano East ended up converting on the two-point conversion following the touchdown with a Mallory pass to Jaelen Anderson to lengthen the score to 15-3.

Plano East continued to dominate in the second quarter, with Mallory finding Anderson twice for two passing touchdowns (one from 35 yards, the other from eight) to take a demanding 30-3 lead. Mallory finished the game with 328 yards and five touchdowns (four passing, one rushing). Plano West was able to score their first touchdown of the game thanks to a 21-yard touchdown pass from Will Cannon to Cole Carter with less than a minute to go in the first half.

Plano West would not score in the third quarter, with Panthers’ RB Joseph Carter rushing for a 26-yard score with 8:05 left in the 3rd and defensive back Zach Nwachukwu running back an 87-yard interception off a Will Cannon pass for a touchdown to give Plano East a 34 point lead. Nwachukwu, a two-star recruit, has offers from Arkansas Tech, East Central University, and Southwestern Oklahoma State.

Cannon ended up rushing for a 3-yard touchdown just four seconds into the final quarter of the game to make the score 44-17. A few minutes later, however, East RB Trey Scott-Jones hauled in a 57-yard touchdown pass to increase the score to 51-17.

Will Cannon finished the game with 117 yards, one passing touchdown, one rushing touchdown, and two interceptions while completing 9 of 23 attempts. Wolves’ RB Noah Scroggins ended the game with a total of 157 rushing yards on 13 carries for an average of 12.08 yards/carry. Cole Carter led Plano West in receiving with 72 yards on three receptions and one touchdown. Nick Griffin followed Carter with 38 yards on three receptions.

Here is a more in-depth look at each teams’ statistics:

Turnovers: 2 (One fumble, one interception)

Plano West will play their final game of the 2018 season against Allen (9-0) at Eagle Stadium on Thursday night.