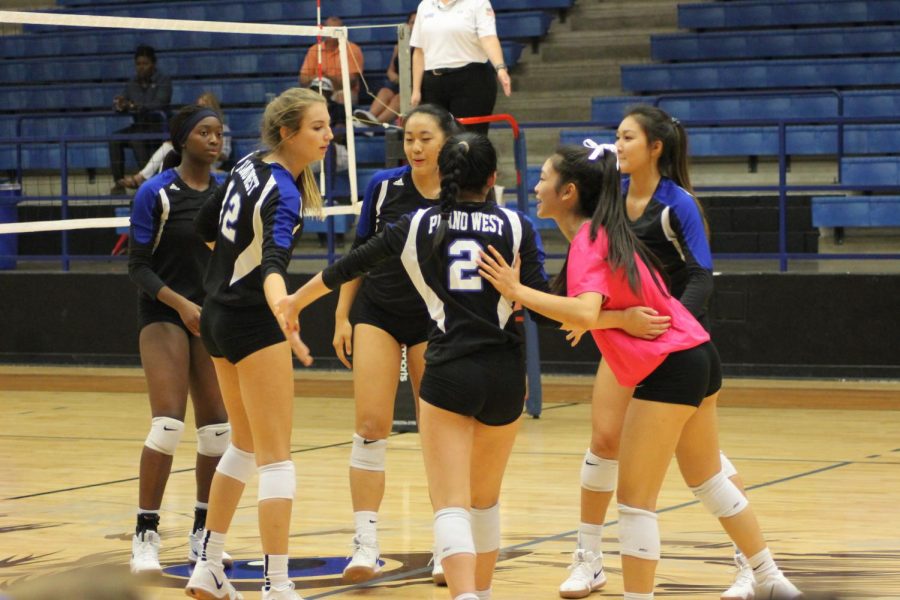 The Lady Wolves celebrate after scoring a point.

This year, the team was led by Iman Ndiaye, who has committed to Penn State University and Jill Pressly, who has committed to DePaul University. This season, Pressly finished third in the area in kills with 617 as well as fourth in blocks with 41, while Ndiaye finished one spot before her in kills with 548 and one spot ahead of her in blocks with 47.

“After losing in the third round last year we are motivated to go further this year,” Ndiaye said. “The further we get into the playoffs the more excitement and confidence we get which has helped us make it to State.”

The Wolves also received support from senior Haley Hoang, who has committed to Northwestern State University, and junior Ashley Le. Hoang led the team in digs with 539, while Le finished with the most assists on the team with 708.

The Lady Wolves finished the regular season with a 40-9 record, losing to Keller (preseason), Flower Mound Marcus, Flower Mound, McKinney Boyd, Southlake Carroll, McKinney, Plano, and Prosper (twice). They also finished 9-4 in district play, ranking them as the 15th best team in the nation and the third best team in Texas.

Here is how District 9-6A stacked up at the end of the regular season:

(Note: Numbers in parenthesis are statistics from district play, and are accounted for in the regular season numbers. Stats have been taken from Maxpreps.com.)

West’s opponent tonight, the Ridge Point Panthers (Missouri City, Texas), finished the regular season with a 46-5 record, only suffering losses to Oak Ridge, Flower Mound, Pearland, O’Connor, and Kingwood Park. The Panthers won a total of 120 sets, and only lost 28. Junior Claire Jeter leads Ridge Point in kills and total blocks with 410 and 139, respectively. Sophomore Karly Jackson leads the team in aces with 50, Nia McCardell leads the team in digs with 758, and Kendall Sekula leads the Panthers in assists with 798.

Plano West and Ridge Point are both 1-1 against common opponents, having both lost to Flower Mound (PW lost 3-0, RP lost 2-1) and both defeating The Woodlands (PW 3-1, RP 2-1). The team scoring averages are almost identical, but Ridge Point edges out West in average wins, with the Panthers recording 2.4 to the Wolves’ 2.2.

Senior setter Sedona Giambalvo spoke on what the Wolves need to do to secure a win against Ridge Point.

“Volleyball is a momentum game so to win we have to be loud and play with confidence,” Giambalvo said. “It would definitely help if we have the stands filled with Plano West students to boost our momentum even more.”

Here is a further breakdown on each teams’ stats:

Plano West and Ridge Point will face-off at the Curtis Culwell Center in Garland at 5 p.m.

You can watch the game live by clicking here.